Swords and sandals Wiki
Register
Don't have an account?
Sign In
Advertisement
in: Arena Champions, HeChaos, Swords and Sandals 1,
and 2 more 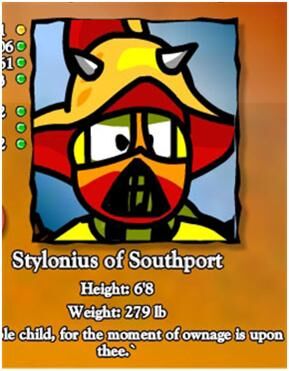 Stylonius of Southport is a great gladiator who is really powerful and he has a son, Son of Stylonius.

Story: A narcissistic boor, though somehow wildly popular for his theatrics. A Klerg from the Gelegrath Caverns, he broke many Arena Championship records until his death at his own hand, tripping over his own ego and falling into a spiked pit. Surprisingly, his will and testament specified he *not* be resurrected on account of “There being no need, as nobody could ever kill me anyway”, but his legacy lived on in Swords and Sandals 2, with his firstborn child, the aptly named Son of Stylonius.

He is also the 5th boss.

Southport’s most beloved gladiator, Stylonius, is a hulking force who delights in crushing foes with the Hammer of Ownage. He laughed contempuously when asked if you would be a challenge.

Tremble child, for the moment of ownage is upon thee.

Community content is available under CC-BY-SA unless otherwise noted.
Advertisement